tcsd mISSION STATEMENT:  TO SERVE TRIATHLETES OF ALL ABILITIES BY PROVIDING SUPPORT, EDUCATION, TRAINING AND EVENTS TO ENCOURAGE AND PROMOTE TRIATHLON AS A SPORT THAT IS PART OF A HEALTHY LIFESTYLE.

FREE RACES.  TCSD puts on its own chip-timed triathlons, duathlons, aquathlons, and running races, all FREE to members. Both competitive and for fun.  Check out our master calendar HERE!

SOCIALS/MEETINGS.  Monthly club meetings include interviews with current top-level professional triathletes and industry product leaders, amazing food, the latest from our sponsors and bountiful raffle prizes.  Regularly scheduled socials allow for us to relax and enjoy our non-training time together!

DISCOUNTS.  TCSD sponsors are generous.  Major discounts from leading-edge companies like XTERRA, ZOOT Sports, Rudy Project, HyperIce/ Normatec, The UCAN Company, Spinergy Wheels, Form Swim, Function Smart Physical Therapy and many more.  See all sponsors and discounts HERE!
FREE GEAR.  Those sponsors who give us great discounts also provide their products for raffles and prizes at our meetings, socials and races.  We've given away everything from product samples, helmets and sunglasses to a new Canyon bike!.  Don't miss out!
INTANGIBLES.  The REAL benefit of TCSD is its people...every age from college student to octogenarian, every level from beginner to seasoned pro, you will feel embraced by the TCSD community as you begin your journey with us.  If you haven't already done so, please join TCSD HERE!

There isn’t much about the sport of triathlon that doesn’t find reflection in the oldest club in the world. When you’re out on the race course, you’ll hear athletes calling out encouragement to team mates, “c’mon CAF!,” or “finish strong, RES!” You’ll also hear “Go TriClub!” No one wonders which “triclub” because there really is only one. There has always been the triclub, Triathlon Club of San Diego.

We find our roots in the very first triathlon, held 25 September 1974 on San Diego’s Fiesta Island when members of the San Diego Track Club got together for something different from another running event. Amongst the 46 men and women who covered the 15 mile course that evening were John and Judy Collins with their family. The Track Club remained focused on running, but members got together from time to time to recreate the event. A few years later while living in Hawaii, John remembered these great events during a debate between swimmers, cyclists, and runners over their endurance events; the now famous 140.6 mile swim/bike/run race in Kona, HI was born. Whether short or long, flat or hilly, triathlon encompasses a vast array of personal challenges. TCSD is about triathlon in all it forms.

It did not take long for the fitness craze of the ‘70s and early ‘80s to recognize triathlon for what it is: a sport for recent couch-potatoes, for weekend warriors, for elite athletes. Triathlon at the time was a wild and wooly event, with rules and race practices still forming. Athletes often simply showed up on race day in nothing more than a swim suit, riding a borrowed bicycle, and hoping friends would hand off some water—or sometimes beer—on the run course. The United States Triathlon Series opened in mid-1982 with its inaugural event at San Diego’s Torrey Pines beach. The series did much to regularise race organisation and strategy, and it made history by offering equal prize money to the male and female athletes. At about the same time, TCSD formally organised with members learning together how best to complete a course, enjoying our beautiful community, and even developing group medical insurance for members! TCSD is about exploring all our sport can be. 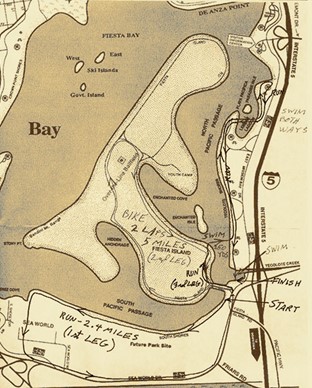 Course map for the first triathlon 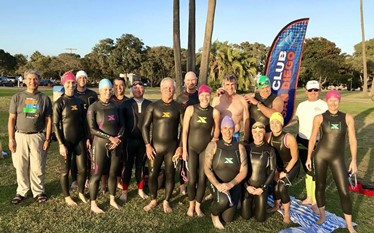 Perhaps nowhere else was the down to earth nature of triathlon summarised than in the leadership of Jim McCann during this same time. Building on TCSD’s member focus, Jim’s leadership expanded the experience in San Diego. He founded wetsuitrental.com, renting wetsuites to the everyday athlete who might be put off by the initial expense of buying this important equipment. He had a way of making new athletes feel welcome, experience athletes to feel challenged, and all athletes to feel they had a cloud of supporters along the race course. Jim served TCSD for about a decade before his tragic death in 2007, and is remembered still at TCSD races. TCSD is about our athletes, no matter their size, shape, background, skills, or ambitions.Triathlon was truly maturing in the ‘90s and was added to the list of Olympic events for Sidney in 2000. Engineers and designers had their influence on each of the three main disciplines: wetsuits improved efficiency in the water, updated bicycle geometry supported the distances triathletes cover, and triathlon-specific clothing helped increase comfort and decrease transition times. The Big Four of Triathlon provided for exciting, charasmatic races, inspiring thousands to join in.

In more recent years, the sport has seen a rise in professionalism as athletes pushed the bounds of what they thought they might accomplish. Professional athletes now enjoy regular international competitions and have slashed the time needed to cover a course. In 2012, San Diego hosted the International Triathlon Series races as part of the selection process for athletes competing at the London Olympic Games. TCSD played a major role in this event and indeed mirrored this devotion to excellence through regular club races and dedicated coaches. Our regular meetings always feature Bob Babbitt, host of triathlons’ Babbittville network, interviewing world-class athletes. TCSD is about enriching our community with experiences and inspiration. We cannot wait to welcome you!  Join HERE 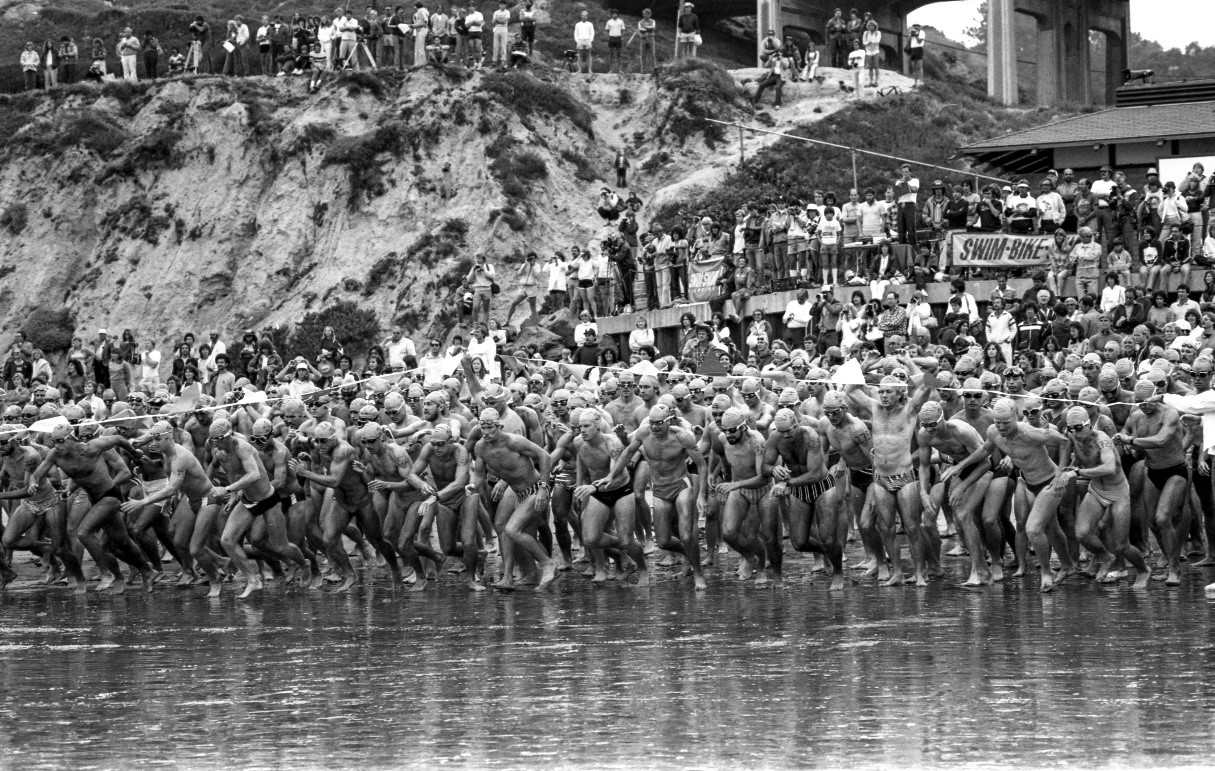 About Us: More Links